TOMODACHI, SoftBank Announce 2013 Leadership Program 100 Japanese High Schoolers from Tohoku Will Be Given Opportunity to Study in California

The TOMODACHI Initiative* and SoftBank are pleased to announce the “TOMODACHI Summer 2013 SoftBank Leadership Program.” Fully funded by SoftBank, this program will send approximately 100 Japanese high school students from the disaster-affected prefectures of Iwate, Miyagi, and Fukushima to the University of California, Berkeley from July 22-August 12, 2013 for an intensive three-week course focused on global leadership development and community service. Participating students will explore methods for strengthening their local communities, while gaining a further understanding of American society and culture through homestays, volunteer activities, and exchanges with U.S. high school students.

TOMODACHI and SoftBank inaugurated the program in 2012, and many of the students from that year are now applying what they learned for the benefit of their home communities.

In recognition of this important exchange program, U.S. Ambassador to Japan John V. Roos stated, “I am delighted that TOMODACHI's partnership with SoftBank will continue this year. There is nothing more important for the future of the U.S.-Japan relationship than connecting the younger generations of our two countries, and this successful program provides the opportunity for our young people to get to know each other while learning valuable skills for their future careers.”

“Visiting the U.S. when I was a high school student and studying in Berkeley changed my life completely,” said Masayoshi Son, Chairman and CEO of SoftBank. “You can change the future by challenging yourself. I sincerely hope that high school students participating in this program will learn about leadership and make the most of their experience in California for their own future and success.”

Interested students are encouraged to apply for program via the link below. The due date for applications is April 15, 2013. Participants will be finalized on May 17, 2013.

Testimonials from Participants in the TOMODACHI Summer 2012 SoftBank Leadership Program 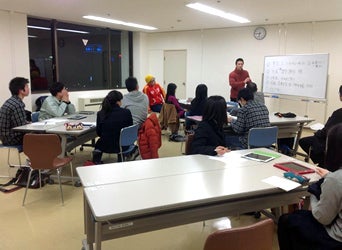 Haruna Shiraiwa and her classmates at a business meeting with H.I.S. Co., Ltd.

After participating in last year's TOMODACHI-SoftBank Leadership Program, Haruna Shiraiwa developed a proposal with fellow students to help bolster the local economy of her hometown of Iwaki City in Fukushima Prefecture. The students worked with the Japanese travel agency H.I.S. Co., Ltd. to institute a unique series of sightseeing tours designed to increase the number of visitors, and the travel agency is preparing to commercialize the idea. “I learned about leadership during the TOMODACHI-SoftBank program,” Ms. Shiraiwa said. “When I applied those lessons to my hometown, I saw the challenges clearly. Things are difficult now, but we want to turn this dream of a business into a reality.” H.I.S. President Akira Hirabayashi also suggested that the students appear in a TV commercial for the company; the commercial was filmed and will soon be aired in the Kanto region. Ms. Shiraiwa commented, “During the program in the United States, I learned the importance of working as a team and cooperating with others. When people help each other, we can all become leaders.” 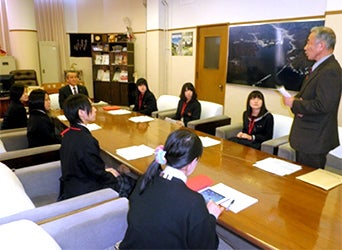 Students participate in a public discussion at Kamaishi City Hall

Kamaishi City in Iwate Prefecture was the location for another example of leadership from an alumnus of the program. Miku Onodera organized a “candlelight night” event for local children who had lost their playgrounds due to the construction of temporary housing facilities, and all of the proceeds from the event were donated to Kamaishi City. Ms. Onodera noted, “What I learned from the program in the United States was that great leaders have great personalities. We need to be thoughtful, polite, and respect the opinions of others in order to achieve our common goals.” The mayor of Kamaishi City subsequently invited Ms. Onodera and her fellow students to participate in an open discussion about the reconstruction of the city, during which the students expressed their ideas and proposals. “I would like to continue to organize more activities in Kamaishi,” said Ms. Onodera. “It is important for the future of the city.”