Our stance on the environment

To create a world where people can live in harmony with the earth, SoftBank Group defines our vision as to help shape the next 300 years for our future generations and the planet. In practice, from a sustainability standpoint, we aim to leverage breakthrough technologies to resolve environmental issues, including energy problems. Based on the recognition that the maintenance and preservation of the global environment is the foundation of the Group's sustainability and growth, we established the “Environmental Policy” as a group policy in May 2021. We require all SoftBank Group directors, officers and employees to understand the Policy and will ask stakeholders, such as investees and business partners to respond in the same way.

SoftBank Group monitors its environmental performance, including data on greenhouse gas emissions and energy consumption in the course of its business operations, and discloses the results annually. In cooperation with our stakeholders, we are promoting initiatives contributing to solve environmental issues, such as addressing climate change and enhancing energy efficiency. The details of these initiatives are disclosed on this website and in our Sustainability Report.

· Lead globally and act locally to reduce and improve our impact on the environment.

· Conduct our business activities with consideration for the global environment and the effective utilization of limited natural resources.

SoftBank Group has thoroughly disseminated the Code of Conduct to all Group employees. Specifically, we require employees to consider the environment in our everyday work, including control and reduction of the emission of greenhouse gases and handling of industrial waste. SoftBank Group also regularly provides training sessions to promote the understanding of the Code of Conduct. In addition, SoftBank Corp. provides “ECO Training” through an e-learning program to help employees acquire basic knowledge and raise awareness of environmental issues. Employees can learn about environmental sustainability and improvement from four perspectives: global environmental issues; trends in the world and Japan; regulations and corporate initiatives, and explanations of legal regulations. E-learning courses on appropriate processing of industrial waste and the Electronic Manifest System are available to relevant employees. Employees can also access these e-learning courses on demand from their iPads or iPhones.

In order to promote environmentally-friendly business activities, the SoftBank Group has formulated ethical standards for the environment in its “Supplier Code of Conduct,” and require suppliers to work in accordance with the ethical standards set forth in the Code. The SoftBank Group will proactively undertake relevant environmentally-friendly corporate activities through partnership with our stakeholders.

Our stance on climate change

Natural disasters caused by climate change are becoming more severe every year and urgent action to climate change mitigation and adaptation is required. The SoftBank Group recognizes the importance of addressing climate change and is making group-wide efforts to provide the society with new and innovative technologies that contribute to solving climate change.

SoftBank Group Corp. set a group target*1 as below in June 2022 and aims to reduce greenhouse gas emissions from business activities of the SoftBank Group to virtually zero by fiscal 2030.

Targets and progress in fiscal 2021 at SoftBank Group Corp. and major subsidiaries

Efficient use of energy and increased reliance on renewable energy

“Tokyo Portcity Takeshiba Office Tower” is where SoftBank Group Corp., SoftBank Corp. and other Group companies are located. This building is equipped with energy-saving technologies, such as LED lighting, that uses motion sensors to automatically adjust brightness and automatically operate blinds.

SoftBank Corp. is promoting the conversion of base station power consumption to renewable energy to achieve its commitment to reducing its greenhouse gas emissions to Virtually zero by 2030. SoftBank Corp. purchases electricity from virtually renewable energy* from SB Power Corp., a subsidiary of the company that operates an electricity retail business. At the end of fiscal2021, more than 50% of the electricity used at mobile phone base stations has already been provided by virtually renewable energy*. The company plans to increase the ratio to 70% or more in fiscal 2022.

Yahoo Japan Corporation has set a goal of converting all electricity used in its business activities to renewable energy by fiscal 2023, and is actively switching to renewable energy sources, particularly in its data centers. In its major data centers in Japan, the corporation has been installing air conditioning systems that use outside air for exhaust heat treatment of servers, and has been working to significantly reduce electricity consumption. In addition, the company has completely switched its power used in Shirakawa Data Center to virtually renewable energy* supplied by SB Power Corp. from May 2021.

SoftBank corp. is engaged in reducing environmental impact through the application of information and communications technology (ICT). Through the implementation and proposal of a new way of working called “White Work Style,” work efficiency is improved while the volume of paper and energy consumed in day-to-day business is reduced. “White Work Style” is a service that allows employees to access internal work systems and software simply by connecting to the network. Home PCs or personal iPhones and iPads can also be connected to an environment equivalent to the office PC, allowing flexibility in working time and location, such as teleworking from home, when on the move or from outside of the office. Furthermore, with computer processing carried out on network servers rather than individual computers, computer power consumption can be reduced. By centralizing these servers at a large-scale data center, operational efficiency can be improved and overall power consumption will be reduced. 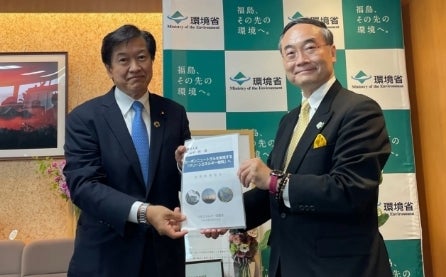 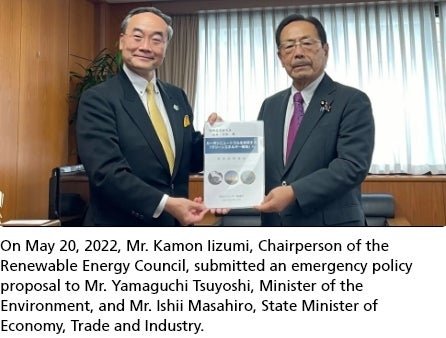 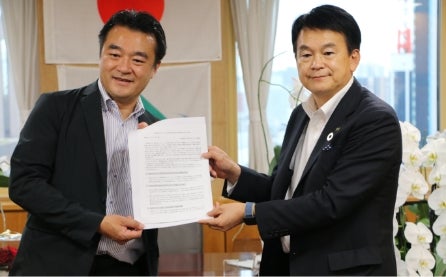 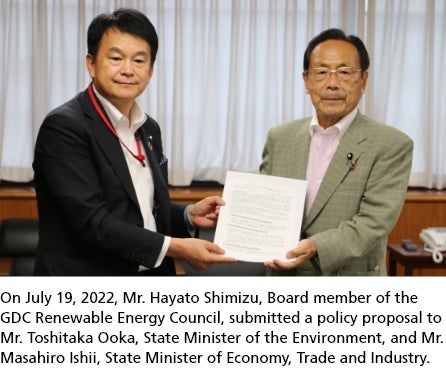 Since their establishment in 2011, both Councils have made several policy proposals to the government that contribute to the promotion and expansion of renewable energy. These include setting renewable energy targets as well as developing and revising energy related systems and regulations that take into account regional characteristics. For instance, the phrase “Renewable Energy as Major Power Source”, has been included in both Council’s policy proposals for several years. The Japanese government’s 6th Strategic Energy Plan, approved in 2021, states that renewable energy will be introduced to its maximum extent at the highest priority as the major power source. Moreover, the 22-24% renewable energy target of Japan’s FY2030 energy mix stated in the 5th Strategic Energy Plan in 2018 has been raised to 36-38% in the 6th Strategic Energy Plan. Renewable energy is now positioned as one of the most important power sources to achieve Japan's 2050 Carbon Neutral Goal. Both Councils plan to continue offering policy proposals to the government several times a year in order to further address climate change through the promotion and expansion of renewable energy.

Furthermore, the two Councils hold events for the municipality members and corporate members, including seminars by government policy makers and experts in the field of renewable energy, as well as workshops and discussion sessions among the members to share good practices and issues regarding renewable energy. At such occasions, the Councils aim to incorporate diverse perspectives, covering not only policy analysis but also case studies of renewable energy projects in which municipalities and private companies collaborate, as well as knowledge sharing with the academia. Through these activities, both Councils offer meaningful opportunities for municipalities and the private sector to further share and exchange information, contributing to the municipalities’ local renewable energy policies and to the private sector’s efforts towards decarbonization. As the secretariat, SoftBank Group Corp. will continue being involved in the operation of the two Councils from a neutral standpoint, contributing to the promotion and expansion of renewable energy.

SoftBank Group Corp. and SB Energy Corp. are inaugural members of the Japan Climate Initiative, a network created in 2018 to strengthen the dissemination of information and the exchange of opinions and views by companies, local authorities and NGOs that proactively tackle climate changes.

The Japan Climate Initiative (JCI) is a network of non-state actors with the mission of "joining the front line of the global push for decarbonization from Japan." The organization was formed in 2018 with CDP Japan, WWF Japan and the Renewable Energy Institute, which Softbank Group Corp. CEO Masayoshi Son founded in 2011, serving as the secretariat.

JCI’s mission aligns with the SoftBank Group’s proactive response to the impacts of climate change and associated risks and opportunities. We recognize climate change as a key management issue and are taking bold steps to tackle it. JCI is a committed advocate of climate action.

The organization has hosted the Japan Climate Action Summit every year since its founding. It has also published the Japan Climate Action Summit Declaration as a message from Japanese non-state stakeholders, a public comment urging the Japanese government to show global leadership by drafting a long-term decarbonization strategy, and an editorial ad pushing the Japanese government to raise its 2030 renewable energy target. By endorsing these policies alongside other JCI members, the SoftBank Group has stressed the urgency of climate action. Our participation in JCI seminars and other events and conversations with JCI members are also helping to accelerate the decarbonization of our own investment and business portfolios.

Our activities with JCI are outlined below.


Going forward, JCI plans to use its leadership and business network to scale up climate action in Japan and drive climate action on the global level.

With the aim of combining renewable energy and technology to realize a convenient, comfortable society, SB Energy Corp. is building a platform that supplies energy safely and continuously.

The renewable energy power generation business, which SB Energy Corp. has been developing since its establishment in 2011, operates in total 50 solar photovoltaic and wind power plants in Japan and Mongolia, with a generating capacity of around 773 MW, enough to meet the annual power consumption of around 270,000 ordinary Japanese households as of April 2022.

Also, since 2012, the company has been conducting an experience-based environmental education program for children, which encourages participants to think independently and creatively about energy.

In addition to its power generation business, the company is conducting a virtual power plant verification project aimed at the effective utilization of power grids and investing in startups whose businesses are highly compatible with renewable energy.

In order to make efficient and effective use of limited resources, the SoftBank Group strives to reduce the environmental impact of its business activities by conserving resources, reducing the generation of waste, and promoting the reuse and recycling of products and other materials. We also contribute to the realization of a circulate economy through our reuse business. 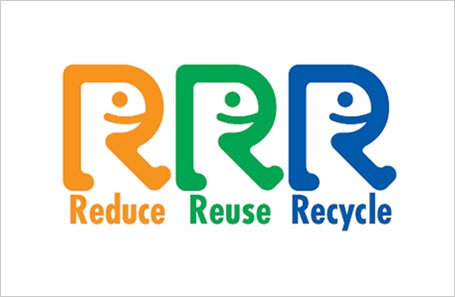 In order to realize a circular economy, SoftBank Corp. is promoting the “3R initiatives
(Reduce = reduce the volume of waste, Reuse = use repeatedly, Recycle = utilize once again as resources)” in the mobile phone services.