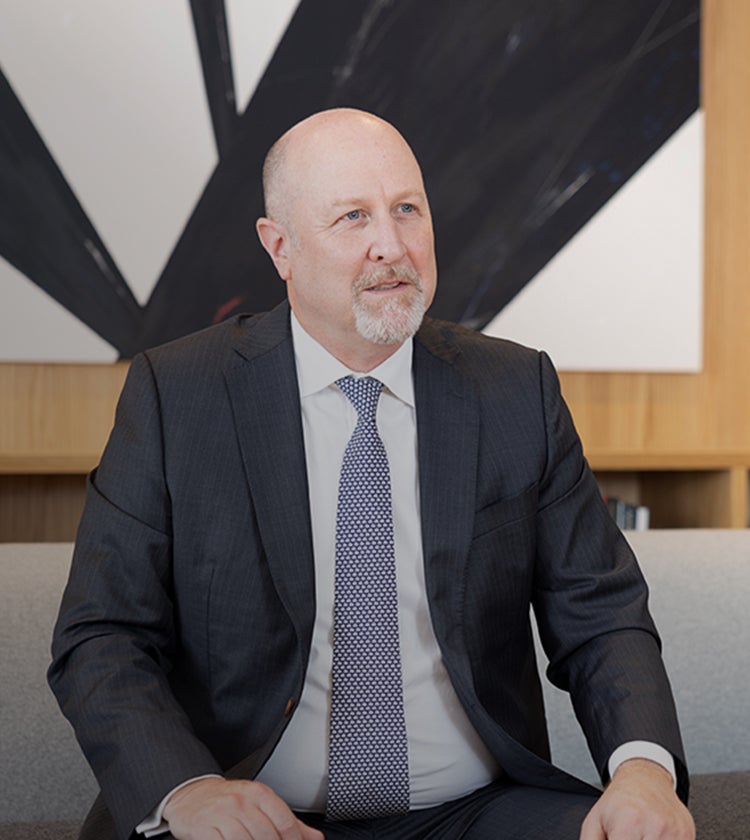 Before I became a lawyer, I spent a few years working in marketing for Fukuoka Dome (now Fukuoka PayPay Dome), having studied at a Japanese university. That was even before SoftBank acquired the Hawks baseball team (now the Fukuoka SoftBank Hawks). I began my legal career as an attorney at the Tokyo office of a U.S. law firm. The focus of my work was advising Japanese trading companies, power companies, and some corporates, doing a mix of M&A, capital markets, and project finance.

My career at SBG began after I was seconded to the company in 2017. Following the secondment, I was offered a full-time role as Group Deputy General Counsel. In September 2020, I was selected to be Group Compliance Officer (GCO), and in December of that year, I assumed the additional role of Chief Legal Officer (CLO) for the Group. In these roles, I manage the Group’s Legal and Compliance functions, but my responsibilities go further than that. I see one of my roles as acting as an ambassador for SBG. Particularly as someone who has a command of both Japanese and English, a strong grasp of the organization’s business strategy and corporate culture, and who works closely on a day to day basis with our overseas teams. It is an exciting job, for sure, although sometimes it is a bit like a roller-coaster. Then again, I should be used to that, having worked on numerous theme park projects!

By way of example of some of the challenges, perhaps I should mention one of the first things I felt the need to do on becoming GCO. When I joined the company, Compliance was a team housed within the Legal Department. After becoming GCO, I wanted to underscore the importance of Compliance and to clarify the responsibility of such function, so we elevated the team within the organization to a full department and built out the depth of the team’s coverage.

A strength of SBG

From a Compliance standpoint, one of SBG’s strengths is the esteem that every employee feels in working for the company. Employee esteem is crucial for corporate integrity. I try to impress upon my team the importance of adopting a “here’s how” mindset, and I encourage them to take pride in their work and to always consider what would most benefit SoftBank as a whole. When they have misgivings about a plan proposed by a business unit, the initial reaction should not always be to refuse point-blank. The mindset they should have is to work out what is ”right” and to say, “Well, you can’t do it that way, but here’s how you could do it.” Granted, of course, when the time comes to say “no,” you must say it loud and clear—that is a fundamental of Compliance.

For regulatory and other reasons, several of our Group companies must operate very independently from SBG despite it being the parent company. Examples include our listed subsidiaries and U.K.-based SoftBank Investment Advisers (SBIA), which manages the SoftBank Vision Funds. SBIA is classified as an authorized and regulated entity by the U.K.’s Financial Conduct Authority. So we respect the autonomy of our Group companies, while at the same time, because our Group’s investing activities are largely delegated to our subsidiaries, SBG coordinates closely with its Group companies to build an integrated Group-wide program of Compliance. And this task is being managed increasingly effectively. For example, if a group company has adopted a particularly robust aspect of its Compliance program, we will co-opt that and roll it out across the entire group.

The insider trading policy is a good example. SBG has world-class rules and systems for managing insider information. The current groupwide measures were in fact modeled on the practices of a handful of our regulated subsidiaries.

Another example is the management conflicts of interest. When a director has a conflict of interest, the matter is always considered in detail and resolved by the Board of Directors in line with Japanese law. In other words, if it is determined, with consideration of the opinion of outside counsel, that the matter constitutes a conflict of interest, then the matter cannot be executed by the deal side until it has been presented to the Board, explaining why it is reasonable, proper, and there is a necessity to take such actions, and the Board would then deliberate and decide if the proposed matter or transactions can proceed.

Back when I was working at a law firm, I sent my clients a regular newsletter called Tim’s Times. I tried to make it an engaging read for the audience because we all know that no one will read a dull newsletter.

We believe that the same goes for Compliance training, so one technique we now use is visual media such as animated videos as part of our in-house Compliance training. We try to make these both interesting and memorable, much like a TV ad. To that end, our Compliance team tries to think like a marketing team. We want employees who take the training to recall the Compliance message when the moment of truth comes. Recently, for example, the head of the Accounting Unit, Kazuko Kimiwada (Corporate Officer, Senior Vice President), narrated a voice-over for one of our animated video trainings, along with other in-house volunteers. When I showed the video to Masa Son, he loved it and strongly supported how it would improve our Compliance culture.

The videos are proving very popular among our employees, mostly because of the fun in hearing their colleagues, voice-over narration, but in turn it has definitely raised the value and recognition of our Compliance training.

Getting across the meaning of kokorozashi takaku

The SoftBank Group Code of Conduct is titled, in Japanese, kokorozashi takaku. This is also Masa Son’s personal motto. The slogan is well known by our workforce, but there is a concern about whether employees truly understand the meaning behind the phrase. SBG’s core philosophies, expressed in the original Japanese, might resonate with the Japanese audience, but those from other countries may not understand it in the same way. SoftBank has obviously gone global at quite a pace, so it is essential that we tailor our message to resonate with our global audience.

Kokorozashi takaku has been translated into English as “Aim High.” To me, frankly this translation fails to convey Masa Son’s original meaning. Kokorozashi connotes a public-spirited attitude. When one hears the word in Japanese, one thinks of a samurai forging his way in life and contributing to society. Unfortunately, the English words “Aim High” alone do not do proper justice to this mindset, so our stakeholders interpret them in all kinds of ways depending on, among other things, their culture. “Aim” may sometimes be interpreted as referring to one’s personal goals and in other cultures to corporate or social goals. “High” may also be interpreted in a similarly broad manner. To some, it may be a reference to striving for high integrity or high performance, to others, the motto may be interpreted as instructing one to aim solely for high profit, high returns, and the like.

It implies that the goal of creating a better society (and corporate culture) should be each individual’s life goal.

Leaving a legacy for a 300-year organization

Our goal for the medium to long term is to set in place world-class governance and a high-integrity Compliance culture at SoftBank. To that end, every employee needs to understand they are creating their own legacy. Personally, I hope to establish a legacy as GCO that, when the time comes to pass on the baton, I can look back on with pride. At the very least, one needs to take it one step at a time. When SBG is still going strong in 300 years, then the current team’s time here will seem short indeed. It would be really great though if, several decades from now, future employees recall the team that helped build world-best class Compliance and governance all those years ago. It is with that kokorozashi takaku spirit that we tackle each day as it comes.