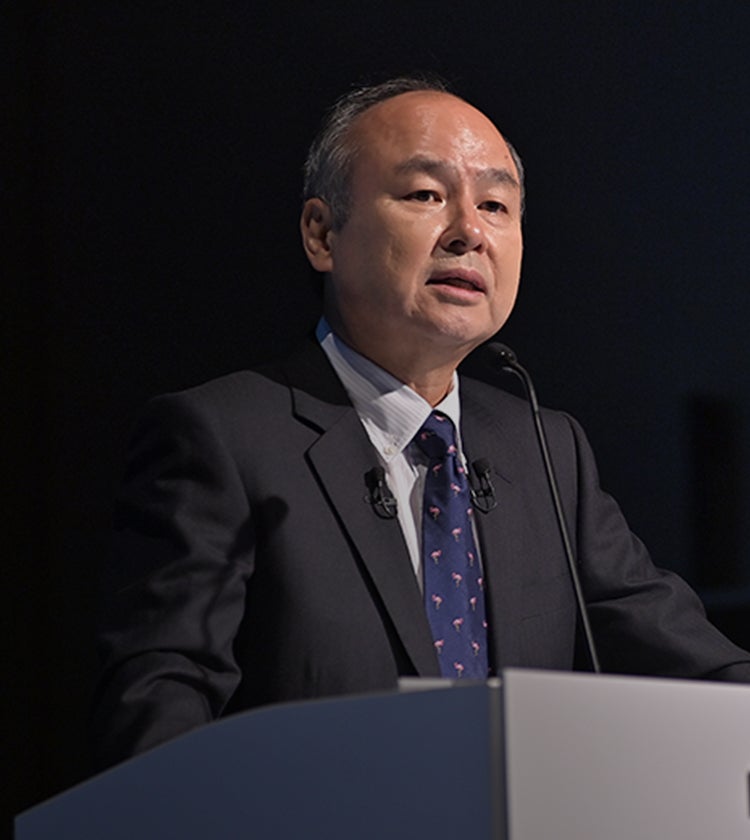 Investing in Technology Evolution
While Adhering to
Our LTV Commitment

The share price of SBG has fallen to 65 as of June 23, 2022, taking the value as of June 24, 2021, a year ago, as 100. Over the same period, the NASDAQ Golden Dragon China Index, which primarily consists of American Depositary Receipts (ADRs) of Chinese companies, and the NASDAQ Composite Index have fallen to 55 and 78, respectively.*1 Since the majority of our current assets consist of stocks of companies around the world, mainly in the U.S. and China, our share price also fell along as the global stock markets declined.

Under these circumstances, it is not easy to predict our stock price tomorrow, next week, or next year. However, the story is different when it comes to long-term trends. The graph shows that SBG’s share price (gray line) has been rising and falling sharply from fiscal 1997, when the company was listed on the First Section of the Tokyo Stock Exchange, to the present. But, when viewed from a bird’s eye, it has steadily increased over time, alongside the growth of the Net Asset Value (NAV; blue line). NAV is the market value of our equity value of holdings minus our borrowings. We are a “Vision Capitalist for the Information Revolution.” We take risks and invest in AI-driven companies to help create a better future for people. Since our business is to increase the value of our holdings through such investments, it is only natural that our share price moves in proportion to our NAV. Therefore, to predict SBG’s share price, we need to consider whether NAV will increase or decrease. 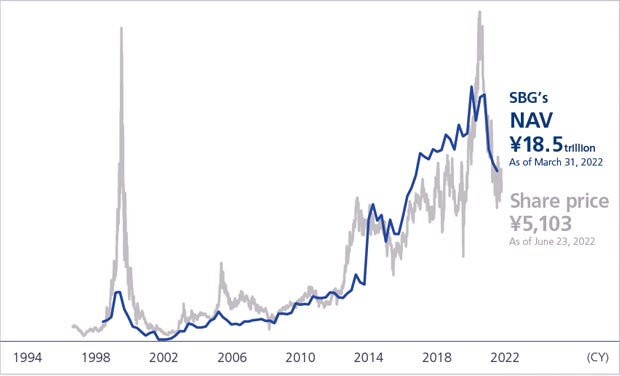 Specifically, we are focusing on two areas: SoftBank Vision Funds, which invest in companies using AI (which is now at the forefront of the Information Revolution), and Arm, which is driving all kinds of technological innovation. These two are without a doubt the two major growth engines for us.

SoftBank Vision Funds identify and invest in so-called unicorns,*2 or companies judged to have the potential to become unicorns, from around the world utilizing AI to deliver all manner of technological innovations. We are the world’s largest*3 capital provider in this field, having invested in nearly one-third of the world’s AI unicorns. SoftBank Vision Funds concentrate on the pioneering elements of the Information Revolution and the Internet revolution. We are now invested in 475 companies.*4

Our other growth engine is Arm. Arm is in the business of licensing processor designs and other semiconductor-related intellectual property (IP) and has been a driving force behind the rapid technological innovation of smartphones. The cumulative number of chips featuring Arm’s technology has consistently grown at a similar trajectory as the growth of Internet traffic. Today, Arm has a 95% market share*5 for main processors in the mobile device market, centered on smartphones.

In addition to smartphones, Arm seeks to drive technological innovation in other areas as well. The first concrete example is in cloud computing. Prior to our acquisition of Arm in 2016, Arm had practically no market share in this area. Since our acquisition, however, Arm has focused its R&D on new processor designs for cloud computing. As a result, Amazon Web Services, the world’s No. 1 cloud service provider, has started to deploy Arm technology for its state-of-the-art cloud server chips. Other cloud companies are also starting to deploy Arm technology, and Arm is seeking to continue to grow its market share. Cloud service providers use Arm technology because Arm-based CPUs consume much less power than those of other companies. This directly affects competitiveness because the biggest cost for cloud service providers is not chips or labor, but electricity. Arm’s technologies allow providers to significantly reduce electricity costs without compromising computing power.
In fact, the CPU in Fugaku (jointly developed by RIKEN and Fujitsu), which tops the world’s supercomputer performance rankings,*6 uses Arm’s architecture.

The second is the automotive sector. Traditionally, hardware, mainly the gasoline engine, has been the most important factor determining the performance and quality of automobiles. However, the structure of the industry is shifting with the development of electric vehicles (EVs) and smart vehicles. EVs have about one-third the number of parts as gasoline-powered vehicles, and 40% of the total cost is the battery. Moreover, autonomous driving requires technologies to analyze images from in-vehicle cameras, recognize people and objects in the vicinity, and operate the brakes, steering wheel, and other controls. Indeed, the vehicle itself is becoming like a moving supercomputer. Many companies are adopting Arm-based technologies that, like in the case of smartphones and the cloud, can provide superior computing power with much lower power consumption.

The third is the area of Internet of Things (IoT). Since IoT-enabled devices are not always used in locations where power supply is available, the key is how to operate them with low power consumption. After our acquisition, Arm’s market share has steadily increased. Arm now boasts the No. 1 market share.*7 We seek to grow that share further in the future.

As you can see, Arm is at the forefront of the Information Revolution and is one of the driving forces behind it. I believe Arm will be at the very core of the Group. We have already announced that Arm has begun preparations for a potential public offering, and I hope that you will watch with anticipation.

Market capitalization of the Internet industry growing despite correction

“Will SBG’s share price go up?” In answer to this question from shareholders and investors, I say one thing: “I believe it will.” Of course, there are times when it will go down. But if you look at it on a five- to 10-year time frame, I am quite confident about our share price.

Incidentally, the share price of SBG, which went public in 1994 (over-the-counter listing), dropped to one-hundredth of its peak when the Internet bubble burst, after surging during the Internet bubble. However, the company was able to survive despite such circumstances. And now, SBG’s NAV stands at ¥18.5 trillion*9 (as of March 31, 2022), so I think we can say that it has grown considerably. Looking at the long-term in this way, things should become less confusing.

Now, energy prices have skyrocketed in the wake of economic sanctions against Russia’s invasion of Ukraine and, combined with monetary tightening in the U.S. to curb inflation and supply chain disruptions caused by COVID-19, there are growing concerns of a global economic slowdown. These macroeconomic headwinds have caused the market capitalization of the global Internet industry to drop from 2,400 to 1,400 (as of June 17, 2022). This swing may be shocking, but considering market capitalization was cut by one-third when the Internet bubble burst and by one-half during the global financial crisis, the current downturn has yet to reach half. This is the third major stock price correction, but I have no doubt the market will grow again. My beliefs and vision have not budged one bit. I believe that the Information Revolution has just begun, and the real work is just beginning. 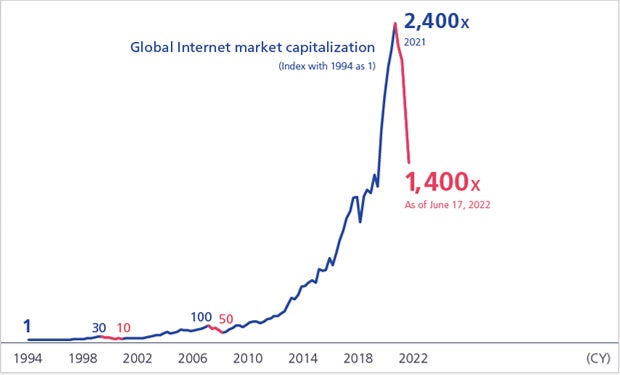 Despite our strong belief in the technology evolution, we are naturally concerned that the global stock market may fall further during a downturn such as the current one. Therefore, we are taking measures to address the risk of further declines. In short, the key is LTV (Loan to Value; the ratio of net debt to equity value of holdings). Our financial policy is to keep the LTV ratio below 25% in normal times with an upper threshold of 35% in times of emergency. To prevent LTV from rising too high, we can simply monetize our assets as appropriate and be more selective in our investments when the environment is uncertain.

In fact, by the end of December 2021, LTV had risen to 21.6%, even without an increase in net debt, as stock markets slumped globally and the value of our equity holdings declined. We realized the ratio could exceed 25% if this trend continued, so we took decisive actions to protect LTV. By making stricter selection of investments and selling assets at the right time, we improved our LTV to 20.4%*9 and significantly increased our cash position by the end of fiscal 2021, while maintaining our gross debt. Maintaining a strong cash position is also a very important measure against risk. Along with LTV, therefore, we have another financial policy, which is to maintain a sufficient cash position to cover at least two years of bond redemptions. Since the environment is uncertain at this time, we have secured a cash position of ¥2.9 trillion,*10 far exceeding the ¥1.3 trillion needed to redeem bonds over the next two years.

Full of motivation, confidence, and dreams

Our conviction in the Information Revolution is unwavering. We will continue investing in technology evolution and will never bet against short-term change. And we will maintain our LTV below 25% as a measure against risk. In other words, our vision is steadfast, but we will continue to make investments in a careful, disciplined manner.

We manage with a view to the next 10, 15, 30, 50 years. The Information Revolution has just begun. I believe that SBG’s real work—what we want to achieve, show, and prove—is about to begin. Our philosophy, “Information Revolution—Happiness for everyone,” has not and will not change. We work hard every day to turn this philosophy into a reality—motivated, full of conviction, and pursuing our vision.